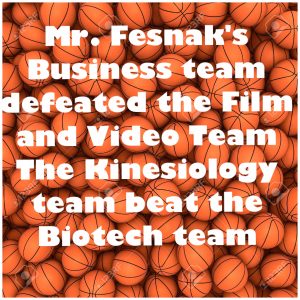 Two exciting games were played after school on Thursday, 2/27.  Mr. Fesnak’s Business team defeated the Film and Video Team in an extremely close game.  Final score was 42-40 with Malik Gibson leading the Business team with 18 points.  Tyson Harrington led the way for Film and Video and he also had 18 points.  Biotech fought hard against Kinesiology with Mr. Devenney playing hard as well as coaching his team.  The Kinesiology win was certainly a team effort.  The Biotech team played hard the whole time even though they had a small bench.  Sincere Delarge led his team with 20 points.  Huge shout out to all the girls who played yesterday and all of them scored!  Congrats to Moya, Prestonia, Jayla and Samantha!